For the sake of preservation of targeted animal and plant species, and land habitats, the entire land area of the Vis Archipelago is included in the Natura 2000 ecological network, with the total of 7 protected zones.

With the total of 9 zones, the submarine area of Vis and all of its islands, islets, reefs and cliffs is part of the Natura 2000 ecological network, the aim of which is to preservemarine habitats and the highly protected species of the bottlenose dolphin (Tursiops truncatus).

‍
Natura 2000 is one of the main tools for the protection of nature in the European Union. It is composed of areas part of a European network that are considered important for the preservation of endangered European species and habitat types. It was established on the basis of the Birds Directive (2009/147/EC) and the Directive on the Conservation of Natural Habitats and of Wild Flora and Fauna (Directive 92/43/EEC). The goal of this ecological network is to preserve or improve the condition of the species and habitats listed in the directives. Aditionally, the Birds Directive refers to the preservation of all wild bird species present in the EU territory. Both directives also dictate a strict protection of species and the regulation of hunting and trade of species. Each member country of the EU contibutes to the Natura 2000 network by selecting the most important areas for each species and the habitat type from the directives.

In addition to the Nature Protection Act, which gives basic guidelines and regulations for management, there are a number of legal documents which closely define ways in which, to manage of areas within the Natura 2000 network. The public institution 'Sea and Karst' is in oversees such areas in the Vis Archipelago Geopark. For areas of special importance, there are spatial planning documents, a management plan of public institution and a specific Decree on the measures of protection, conservation, improvement and use of any protected area. The legal mechanism used to evaluate and determine the eligibility of a plan, program, or intervention is also important for the preservation of the ecological network.

Islands, islets and cliffs of the Vis archipelago are habitats to as many as 126 bird species. Of these, 11 are targeted bird species of the ecological network Natura 2000, namely the characterstic open-sea species of Eleonora's falcon (Falco eleonorae), Scopoli's shearwater (Calonectris diomedea) and the Yelkouan shearwater (Puffinus yelkouan). Eleonora's falcon is of great importance since it is found almost nowhere else in Croatia, outside of the open-sea islands. Approximately 80 to 100 pairs nest in the area of Vis, Biševo, Svetac and the surrounding smaller islands.

There are 17 known species of mammal in the Vis archipelago, of which the most significant is the bat. There is a total of 10 known species of bat, 4 of which are targeted within the Natura 2000 network: Schreibers' long-fingered bat (Miniopterus schreibersii), Geoffroy's bat (Myotis emarginatus), the greater horseshoe bat (Rhinolophus ferrumequinum) and the lesser horsheshoe bat (Rhinolophus hipposideros). The most endangered island species is the greater horseshoe bat, Geoffroy's bat and Scrheibers' long-fingered bat. Only one amphibian species was found of the island of Vis – The European green toad (Bufo viridis). It is found at only two locations. The Vis archipelago is also home to 9 recorded reptile species, of which the most significant is the endemic type of karst lizard on some islets (Podarcis melisellensis var. melisellensis). The Four-lined snake (Elaphe quatuorlineata), is also a targeted species within the Natura 2000 network.

The submarine zone of Vis and its islands, islets and cliffs is included in the ecological network Natura 2000, which aims to preserve marine habitats and the highly protected common bottlenose dolphin species (Tursiops truncatus). It is estimated hat the bottlenose dolphin population contains a minimum of 250 mature adults, and the Vis archipelago is the area in which this population raises its young. Around the waters of Biševo and on the southwestern coast of the island of Vis there are as many as 181 macroalgae families, 2 species of seagrass, 269 species of invertebrates, 347 species of phytoplankton and 100 zooplankton families and 4 whale species. Alongside 114 fish species recorded in the wider area of the Vis archipelago, there are 1017 registered families.

The coast of Vis archipelago is extremely rich in geomorphological phenomena.Some rather pecuiliar phenomena is the abrasion caves on the southern exposures of this archipelago; their formation occures beacuse of limestone structures and strong breaking waves from the open sea. Thirty-eight submerged and partially submerged sea grottoes, have been identified so far, and all are part of the ecological network Natura 2000. These grottoes give the submarine area of the Vis archipelago an otherworldly type of beauty and appeal. The longest partially submerged sea grotto in the Adriatic, the Monk Seal Cave, is located on the island of Biševo. That same island is also home to the most-visited partially submerged sea grotto in the Adriatic, the Blue Grotto, with as many as 120.000 visitors annually. Along the steep underwater seabeds of the Vis archipelago, in places with poor visibility and stronger currents, a heterogenous coralligenous biocenosis has developed, with gorgonias, stony corals, bryozoans, lobsters, starfish and numerous other organisms taking up the surface of approximately 1210 ha. Another characteristic of the Vis archipelago is excellent preservation which can be found at unusually low depths of 2 species of coral. The first is the highly commercially exploited and prized red coral (Corallium rubrum), than the second is the black coral (Antipathes sp.), an otherwise rare species in the Adriatic, which is at greater depths. Coralligenous cliffs are part of the ecological network Natura 2000, and need to undergo further research and protection. Due to the existence of widespread Posidonia meadows (Posidonia oceanica), some of which are hundreds or thousands of years old, the area of the Vis archipelago is part of the ecological network Natura 2000. It has been estimated that the seagrass plant of Posidonia covers up to 1171 ha of the Vis archipelago seabed. Sea grass Posidonia oceanica is the most widespread and endemic sea grass in the Mediterranean. 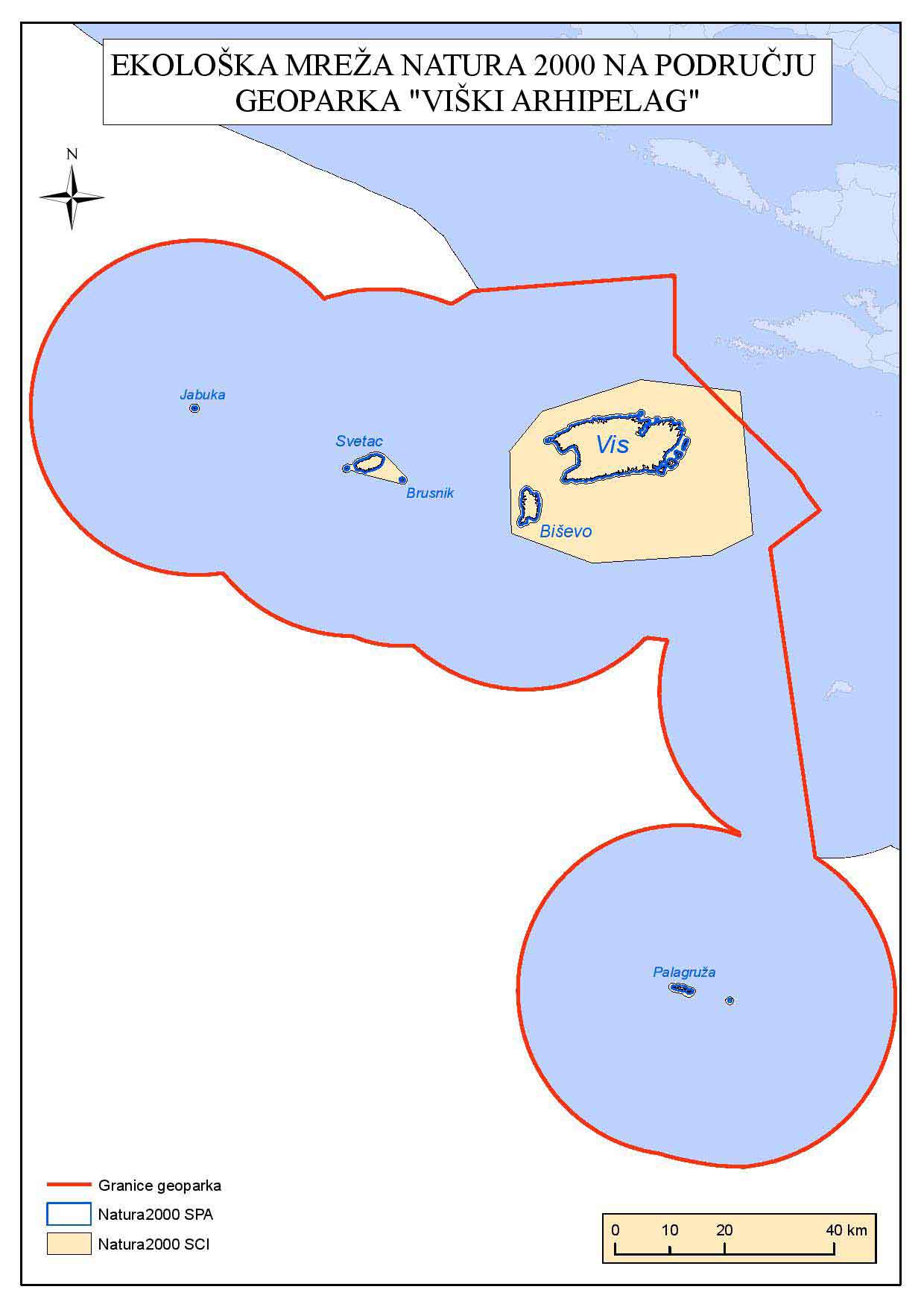