The Blue Cave
a geomorphological monument of nature

In 1884 the Viennese painter baron Eugen Ransonnet introduced the Blue Cave on the island of Biševo to the world. His discovery marked the beginning of tourism in Dalmatia, and the Blue Cave has since become a must-see tourist attraction on the Adriatic. The Blue Cave is protected as the geomorphological monument of nature since 1951. There are orginazed visits to the cave from the nearby Mezoporat Bay. 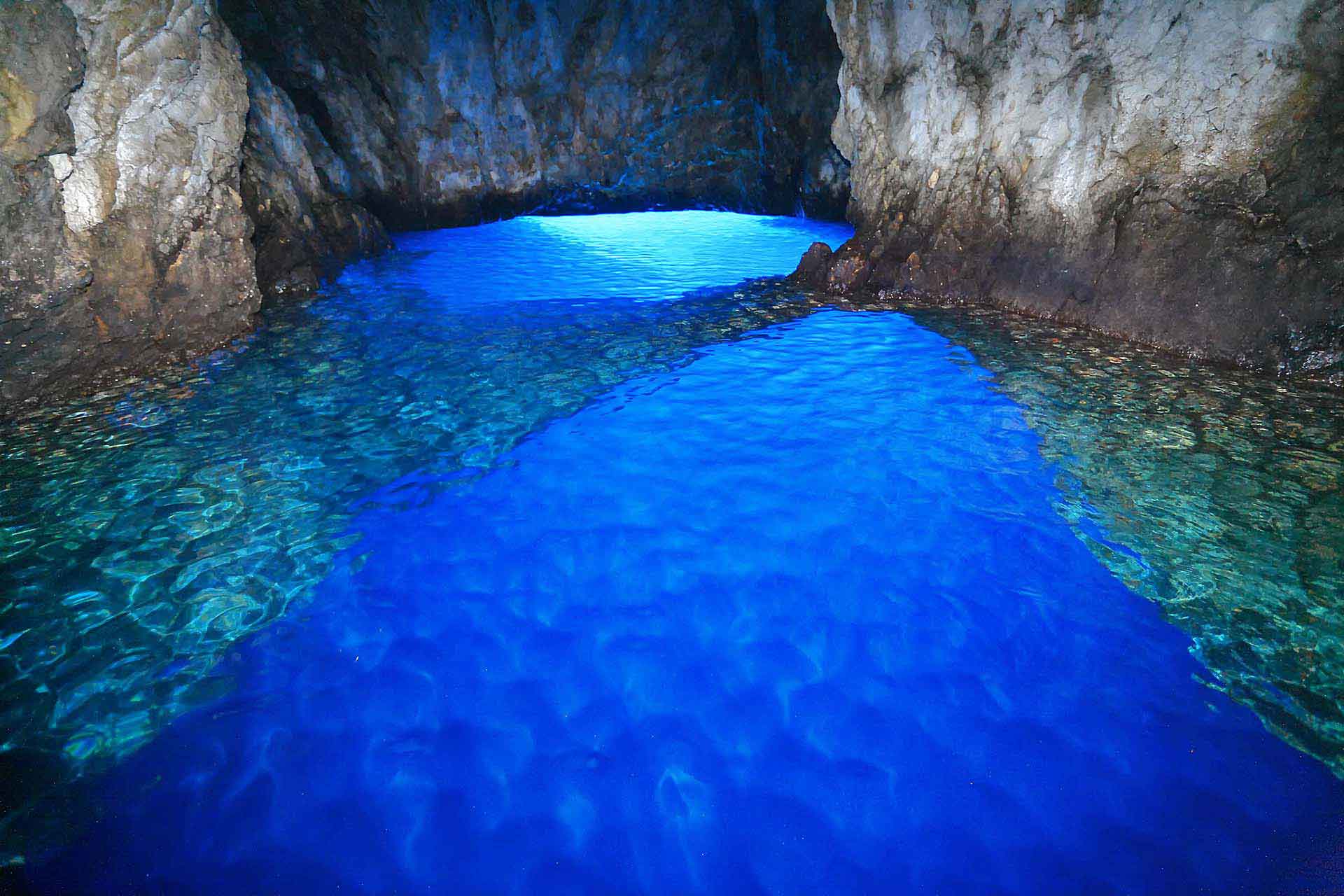 The Monk Seal Cave
a geomorphological monument of nature

The Island of Biševo is also home to the Monk seal Cave – the longest sea cave int he Adriatic (160m) protected as geomorphological monument of nature in 1967. Its name derives from its former inhabitant - the Mediterranean Monk Seal, Monachus monachus. 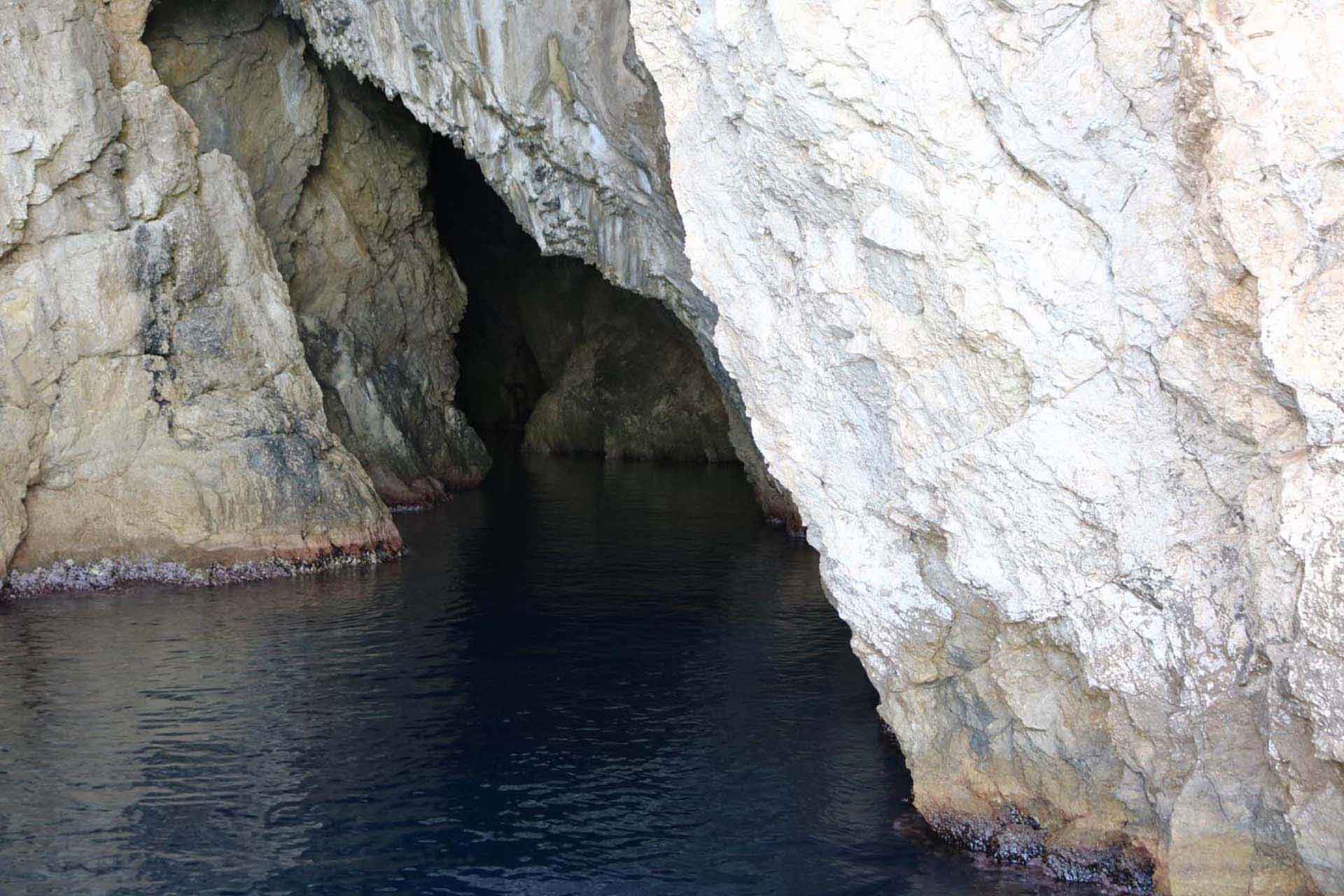 Rising above the sea like a black pyramid, the island of Jabuka is removed some 30 nautical miles from Komiža, in the western direction. This 97 m high island with 700 m in volume was declared a geological monmument of nature in 1958. Jabuka is composed of deep crust magmatic rock, whose magnetites interfere with seafarers' compasses, making navigation in conditions of poor visibility extremely difficult around its waters. Jabuka's underwater area is rich with fish and crabs, which is why Komiža's fishermen frequented this island in the winter months, on their falkuša boats, risking their lives in dangeours open-sea conditions on an island without an actual docking area.

Jabuka has no natural bay and does not provide shelter from any wind. Anchoring the boat on this island is difficult due to deep sea around the island, and its smooth rocks polished by the sea make it impossible to fasten the boat line around them. Still, there are as many as twenty toponyms recorded on this black rock in the middle of the sea. These names are the only human traces on this furtest removed insular frontier of the eastern Adriatic.

The island of built from the volcanic diabase rock. It is home to an endemic black karst lizzard Podarcis melisellensis pomoensis, and among the plants the endemic plants of Centaurea jabukensis and Centaurea chritmifolia. 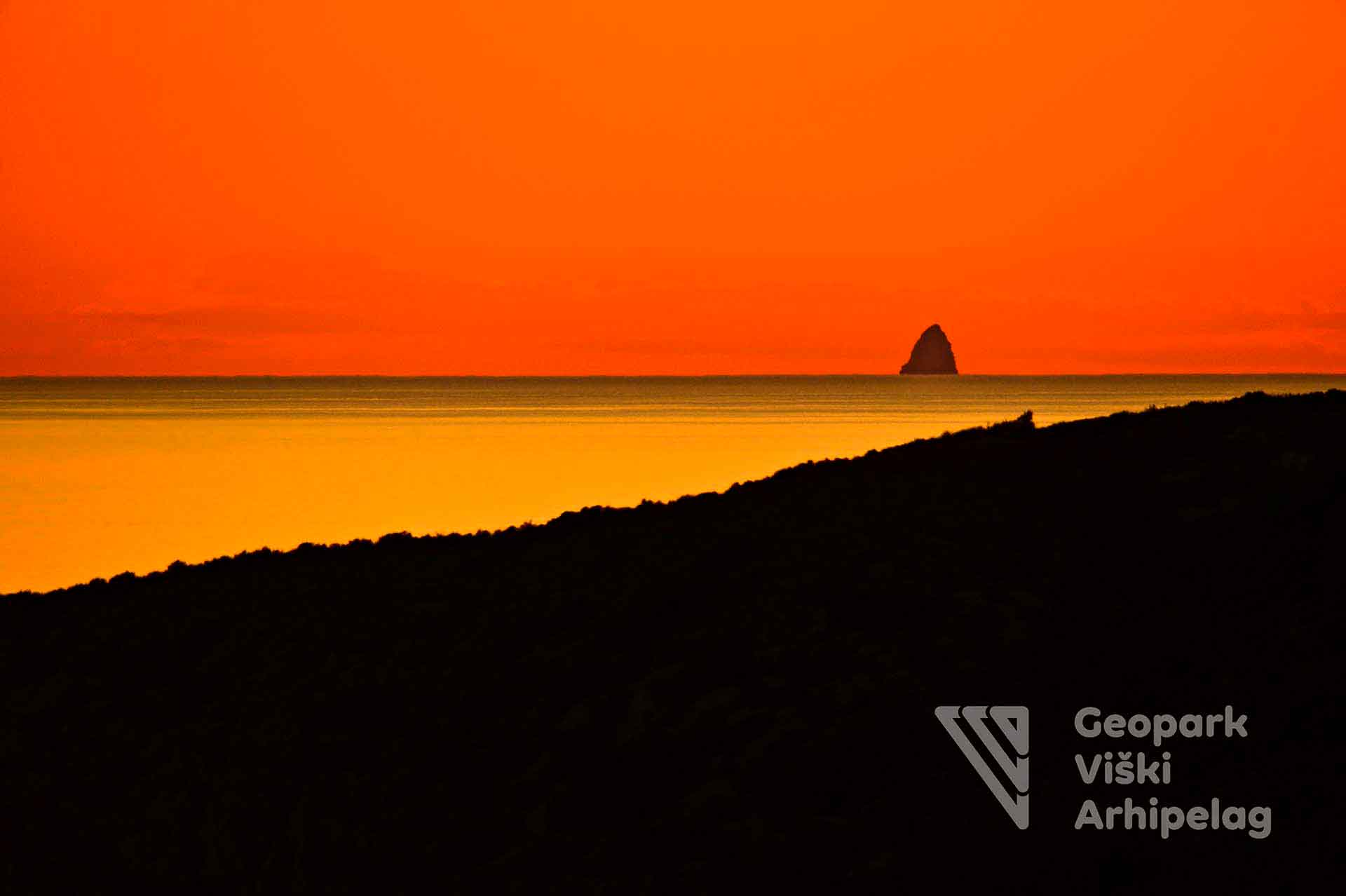 The cave has been protected since 1967 as a geomorphological monument of nature, and the Island of Ravnik a significant landscape. The Green Cave has two large openings. Its attraction lies in small opening in the middle of its high dome through which sunlight pierces the cave interior, and lights up the sea bottom like a spotlight in the darkness of the cave. The darkness of the cave enhances the intensity of this miraculous spotlight that looks like the bottom of the cave shines the surface. 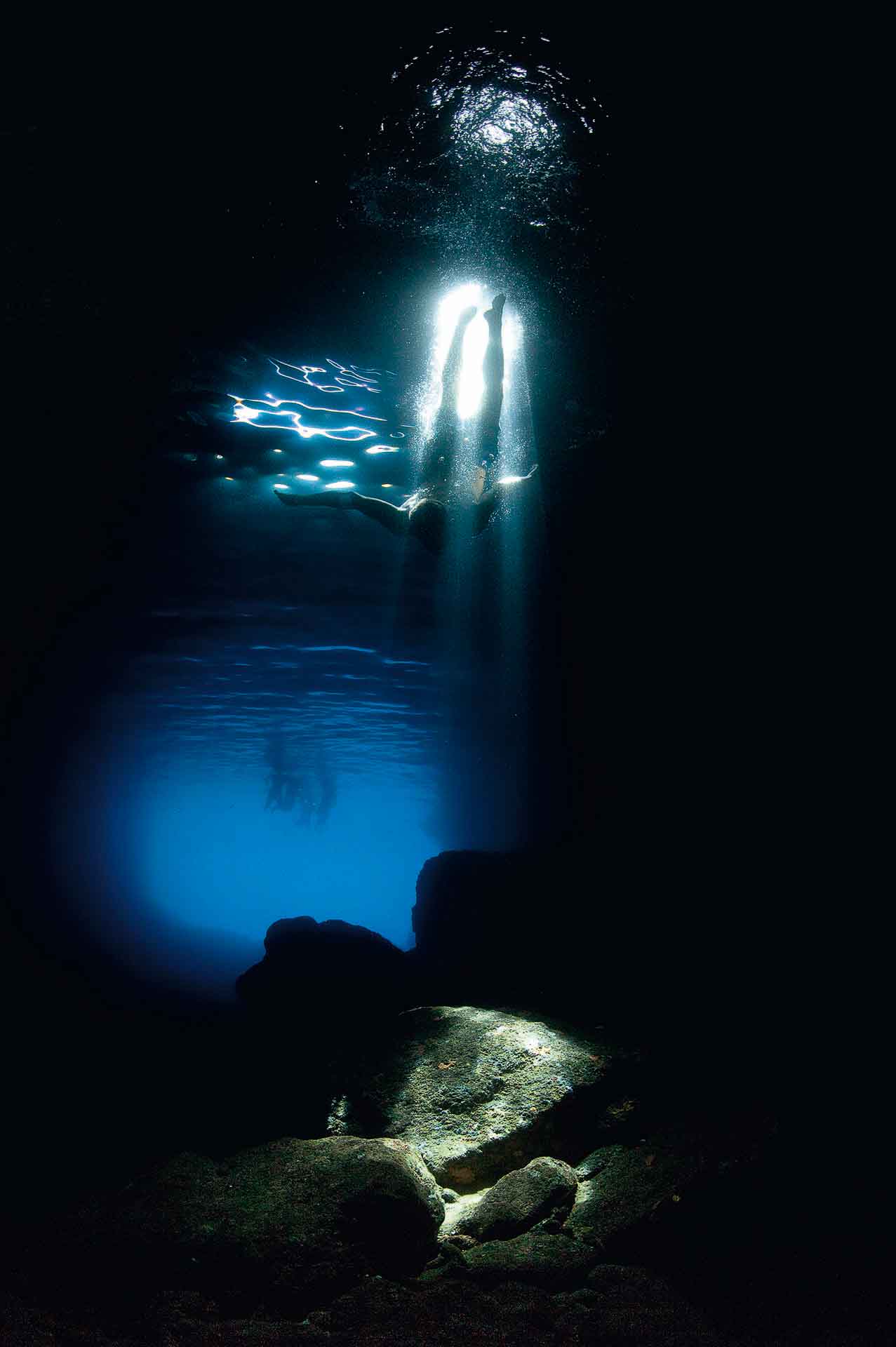 In 1967 this bay was protected as a significant landscape. A narrow and long bay ends with a stone gate leading into a small cove a pebble beach, surrounded by layerd rocks walls. Once Stiniva was karst cave, which probably collapsed several thousand years ago. In 2016 Stiniva was declared Europe's most beautiful beach. 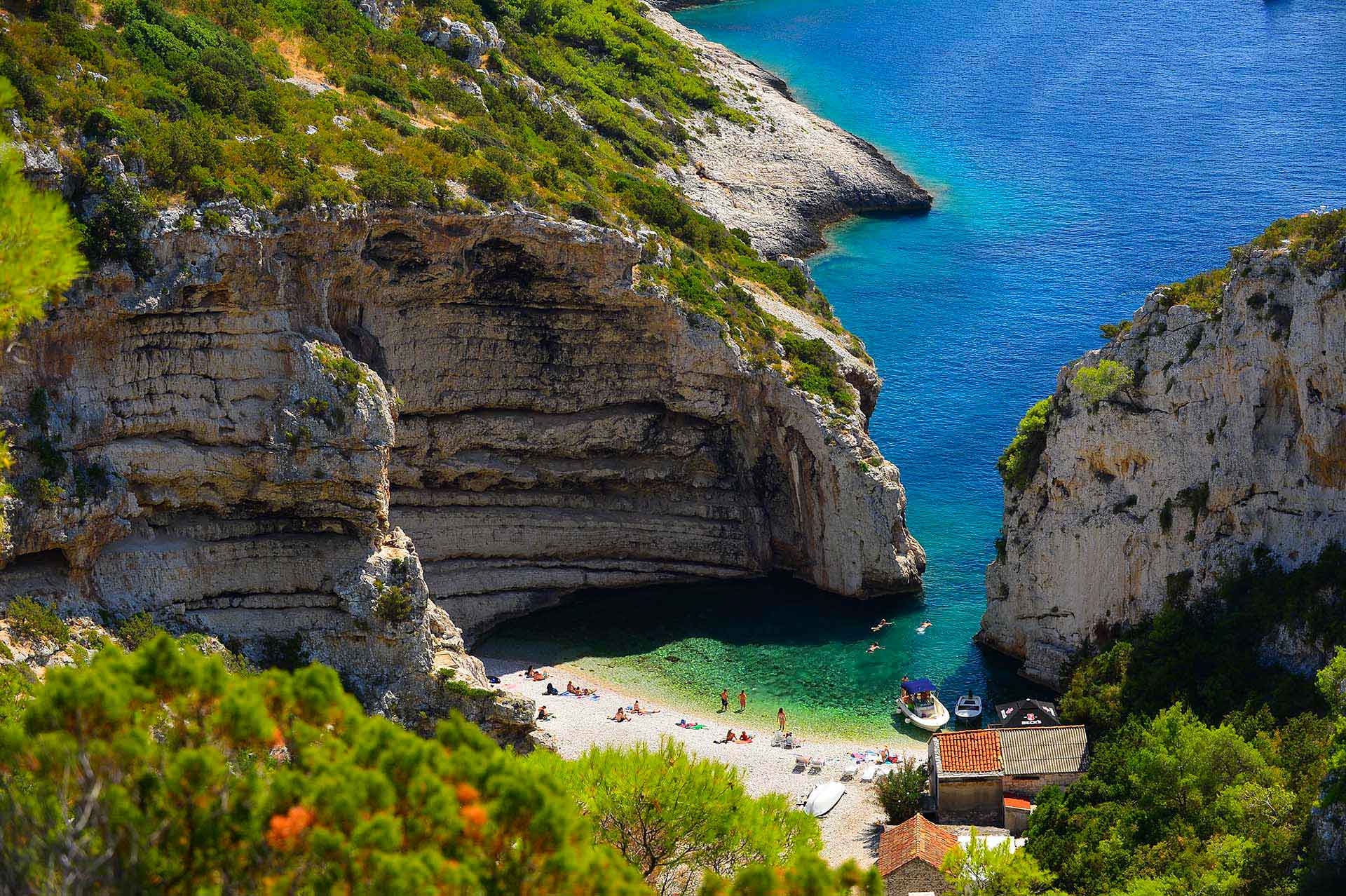 The islet of Ravnik (0,27 km²) is located off the eastern coast of the island of Vis, approximately 800 m removed from the village of Rukavac on the coast of Vis. It is protected as a significant landscape, and its greatest attraction is its Green Cave on its west coast, protected as a geomorphological monument of nature since 1967. 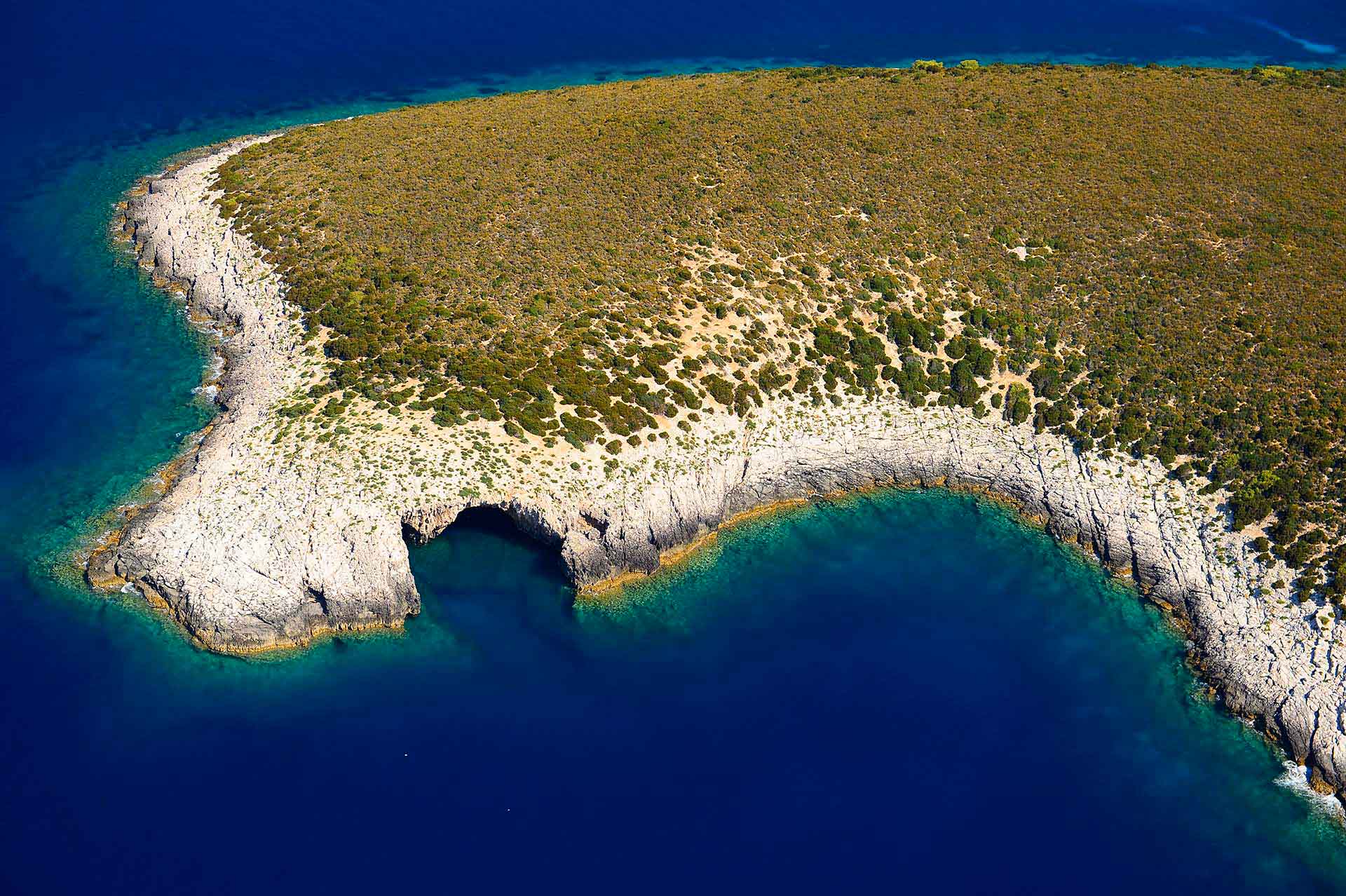 Brusnik
a geological monument of nature

Brusnik is removed 13 nautical miles from Komiža, in direction west, south – west. Alongside the Island of Jabuka, it is the only Adriatic island formed mainly from igneous rock. Brusnik rises 23 meters above the sea surface, it is around 200 meters long and 150 meters wide.

Unlike Komiža's vulcanites formed by the cooling of molten rock on the brims of na anciant volcano, Brusnik and Jabuka are made of subvolcanicdiabaseformed by crystallization of magma on its way from the deepmagmatic core to the surface. The Island of Brusnik is far more complex than Jabuka, which is entirely formed from the diabase. Brusnik is a „rising“ island. Paleo-beach pebble conglomerates can be found on the island's very top, which inidactes its more recent rice. There is an enedemic black lizard specie Podarcis melisellensis living on the island.

In the middle of the island there is a ravine with depression filled with a sea, as fishermen from Komiža used and made larger pools with seawater of pebbles for keeping caught lobster. On its great shore of black pebble conglomerates, you can see the remains of a fishing cottages built from large pebble. These miniature homes covered by the bushes from the nearby island of the St. Andria used to serve for the salting blue fish in barrels and to keep fishermen away from sun and wind. As part of the geological story, there is an inescapable fishermen story about fishermen who hunted lobsters for European metropolises during the winter, long before tourism came.

The Island of Brusnik was declared a protected area in 1951, int he category of geological monuments of naturedue to its magmatic origin and extraordinarly rare minerological and petrographicstructure, since our islands are usually built of limestone. 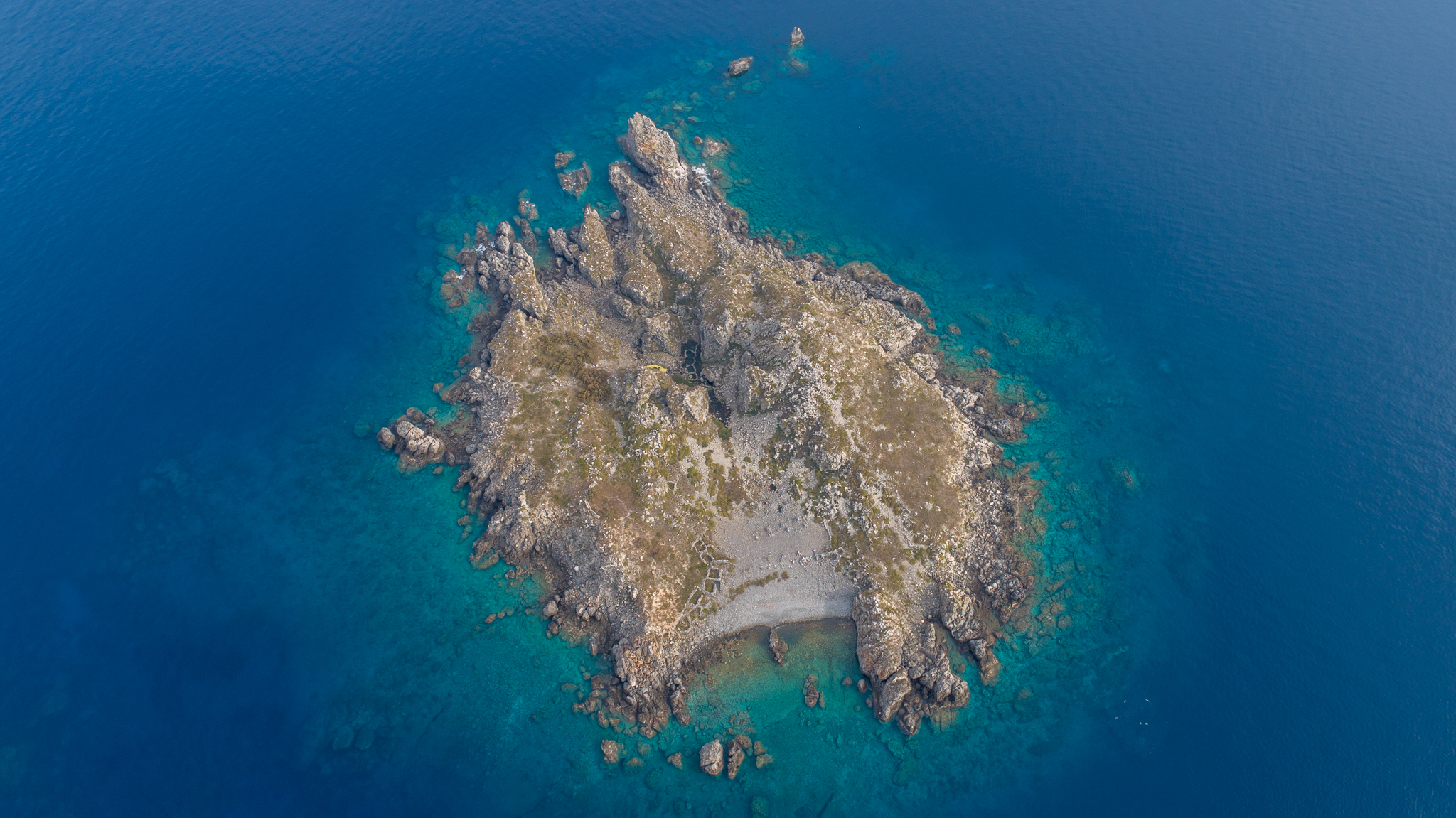