Sacral heritage in the area of Komiža 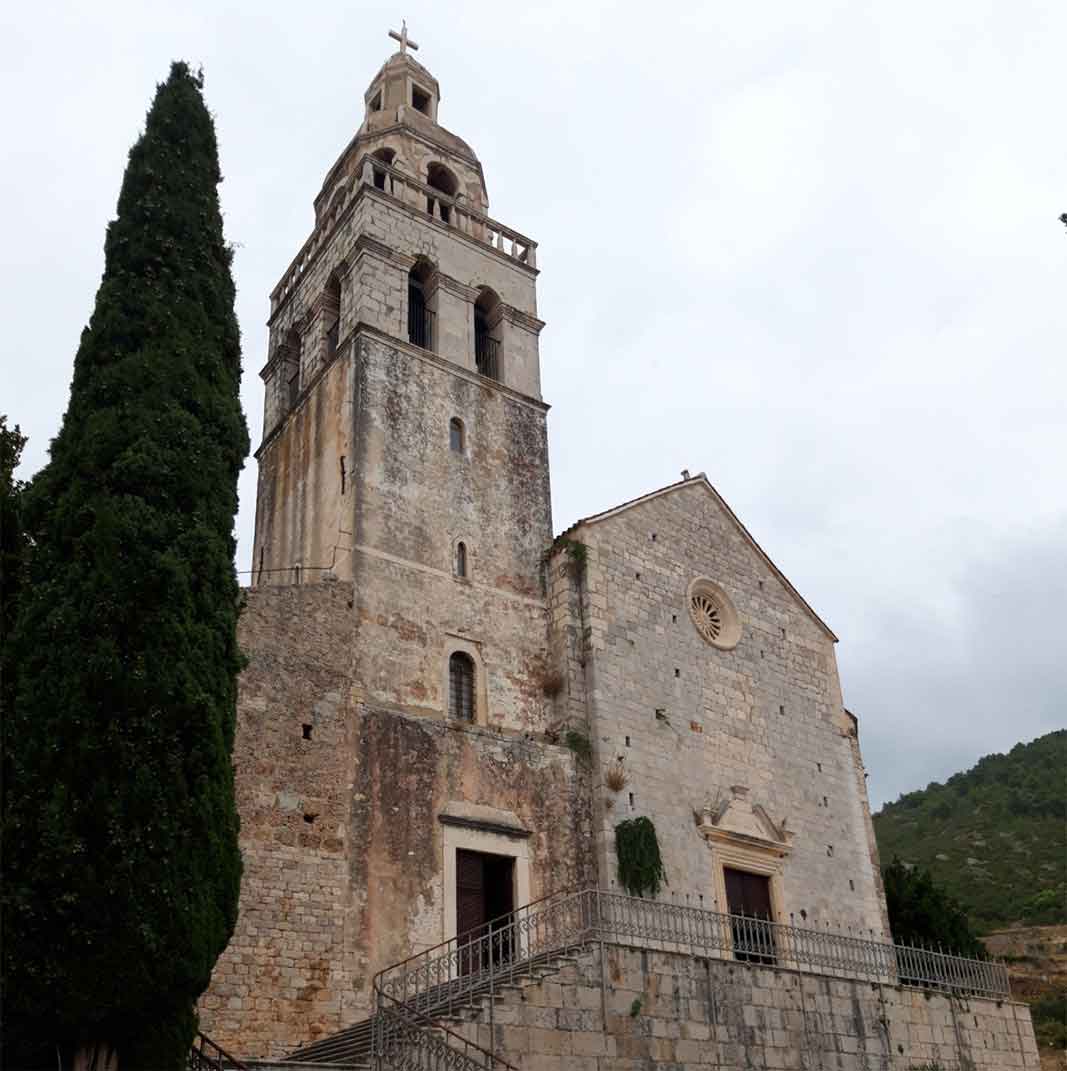 It is belived that the church and monestery were built by Benedictines from Biševo in the 12th century. However, one documentit is mentioned for the first time only in the 13th century. Regardless, the monastry has retained parts of its ancient past into today, specifically the part called Muster (lat. Monasterium). This is especially remarcable , since 16th and 17th centuries, when the church was built and baroqueed, and the whole structure was laid out by bastion. 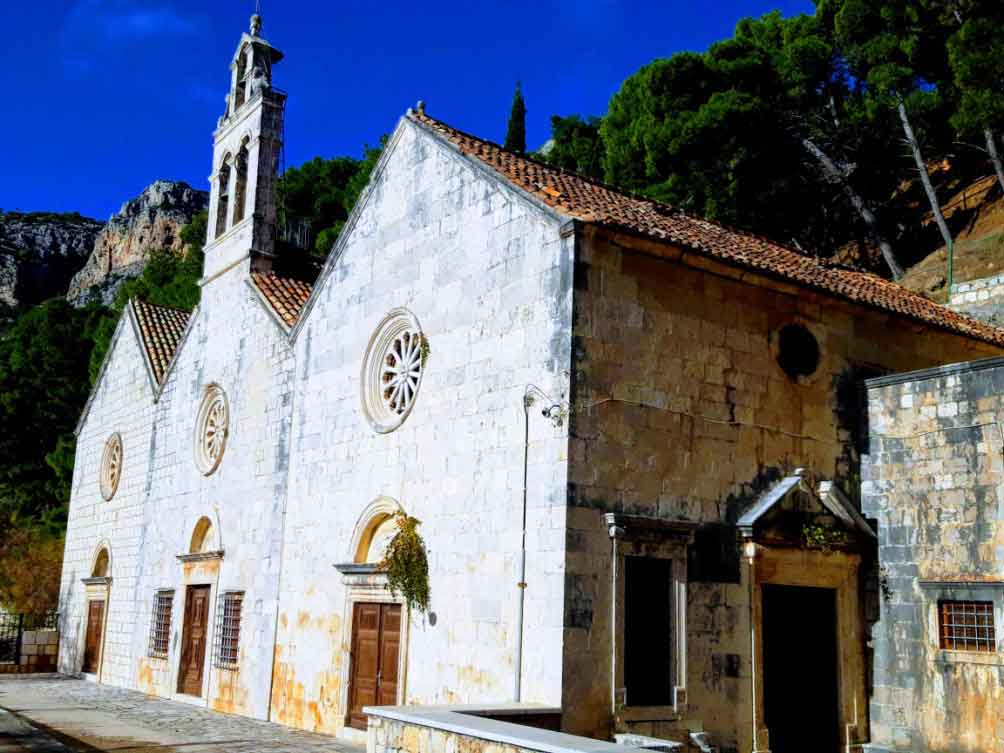 2. The Church Lady of Pirates in Komiža

‍
The reinaissance church Lady of Pirates was built int he 16th century on a pebble beach. The three-nave church is formed from three joint buildings. It was built with finely crafted stone carvings. In the interior lies aBaroque altar, a richly decorated ehree-piece wooden choir organ, and seafarers' vows. Along the church is fanced yard with a hexagon crown of well-decorated reliefs. The object is considerd a protected cultural asset categorized as „immobile cultural good – individual“. 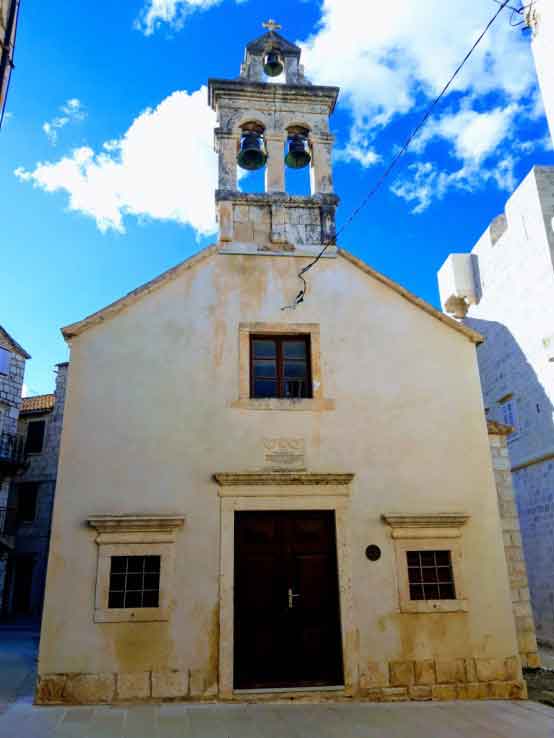 3. The Church of Our lady of Seven Sorrows

‍
It is the youngest churc in Komiža, built in 1759. It is located near the castle „Commune“ from 16th century. It was commissioned by Michael Milinković, who was a writer and the parish priest, and was funded by the financialcontributions of locals catholics. Its purpose was to assist the infirm and dying. The church todays holds daily rituals. 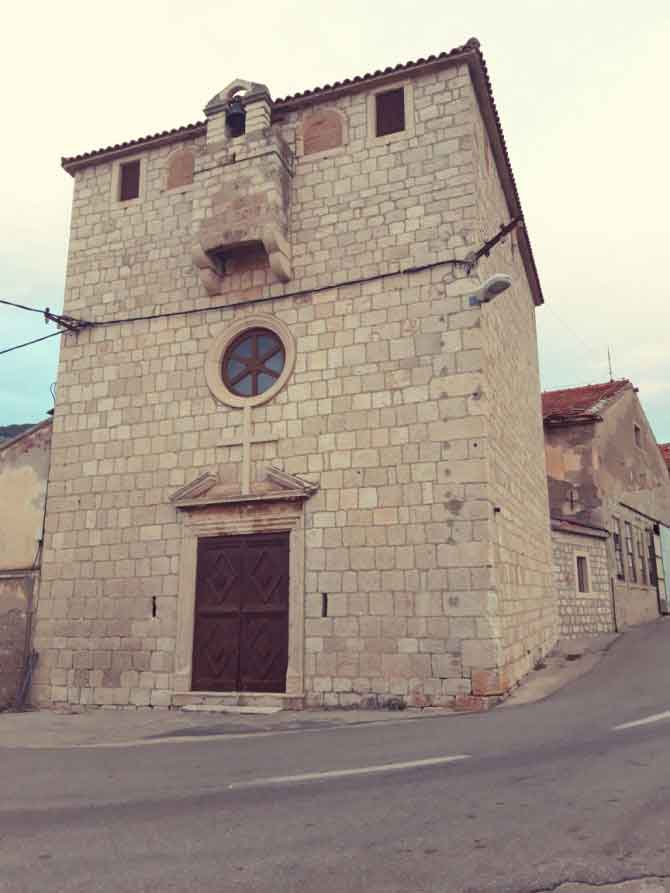 ‍
The church of St. Roch was built in 1763 and functioned as a church fort. The old Church of St. Roch was built int he 16th century, but today only the garrulous door of the former sacristy remains. In the church, there is a wooden late-baroque altar with a new painting of the Our Lady of Mount Carmel, St. Roch, St. Vincent Ferrer, St. Simon Stock. 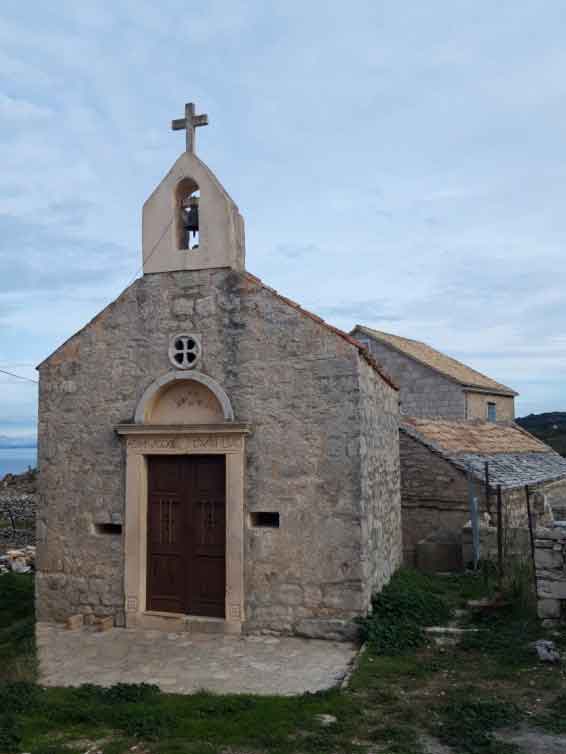 5. The Church of St. Anthony

‍
The baroque chapel of St. Anthony of Padua in Octagan was built as a family chapel adjacent to their home. It was built in 1714, and was built by Frano Visković on a property called Mirce. 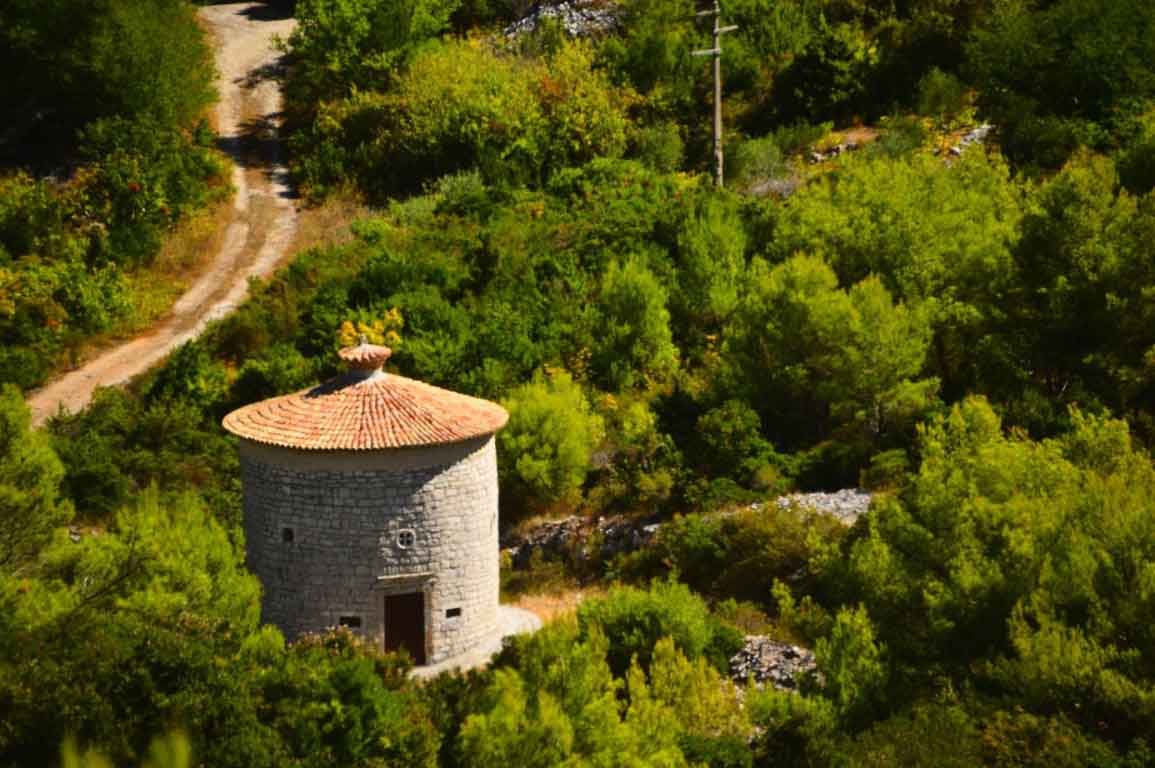 6. The Church of Our Lady of Planica

‍
The Church of Our Lady of Planica is located in the middle of the Island of Vis, on the road leading from Vis to Komiža. Historical sources from the year 1668 detail a circular ground plan with a shallow rectangular apse int he east, built from stone. At the top oft he roof sits truncated wrought-iron curtain int he form of rhomboidly fitted bricks.From the church's masonry, we can identify three stages of construction, all of which are int he Baraque style of architecture. The apse is a small stone Baroque altar a bears the image of „The metting of Mery and Elizabeth“ The church is a protected cultural assetcategorized as „ immobile cultural good – individual“ 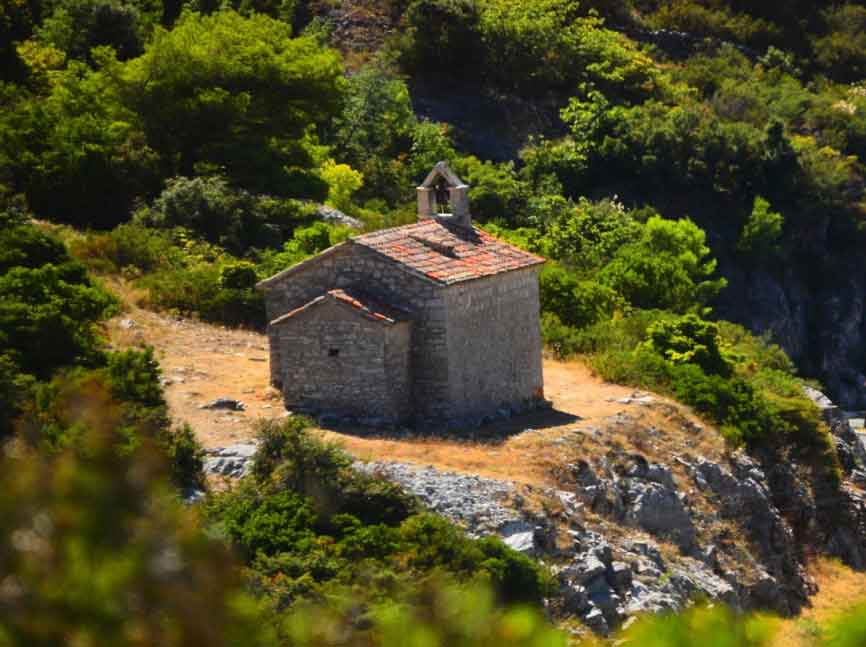 7. The Church of St. Michael

‍
The Church of St. Michael was built in the 12th century on the slope of a hill above Komiža as the Benedictine church of the Biševo monastery of ST. Silvester. It was restored and given Baroque elements in the 18th century. It is one nave building with a quadruple apse and the main facade faces west. There is a bell tower on the main facade which is made of chisels that are connected by winder sections. In the interior , there are partially preserved beings with blind arches. The object is protected cultural asset categorized as „immobile cultural good – individually“. 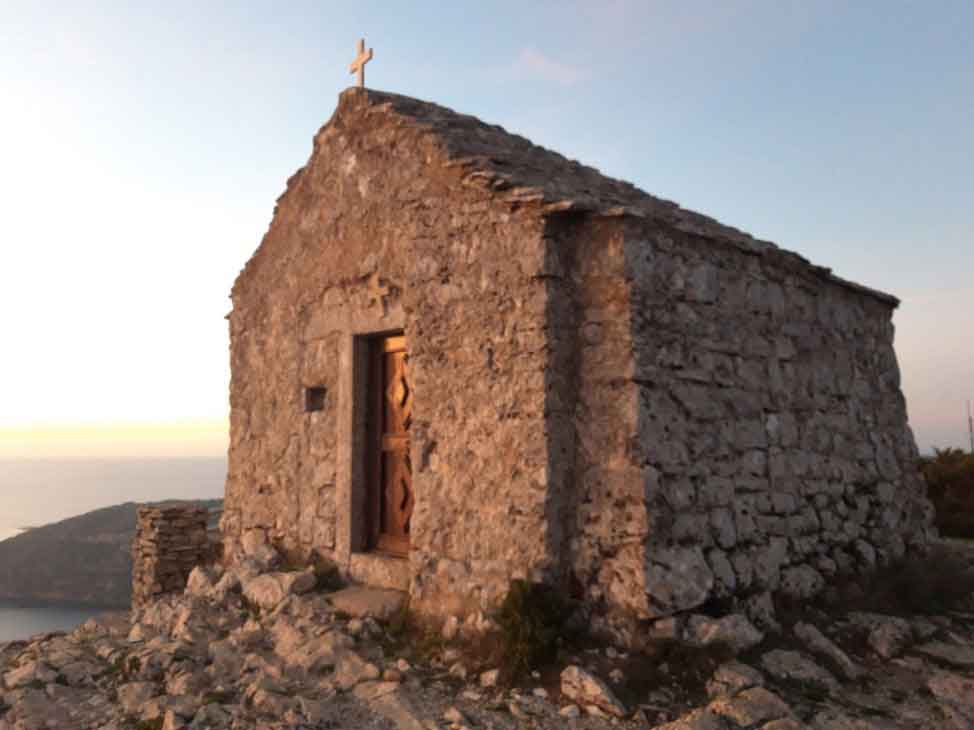 ‍
The Church Holy Spirit is built on higest peak oft he island – Hum hill. It is belived to date from the 15th century. A record kept by Bishop Milan int he year 1650 notes that processions had been visiting the church since its founding. 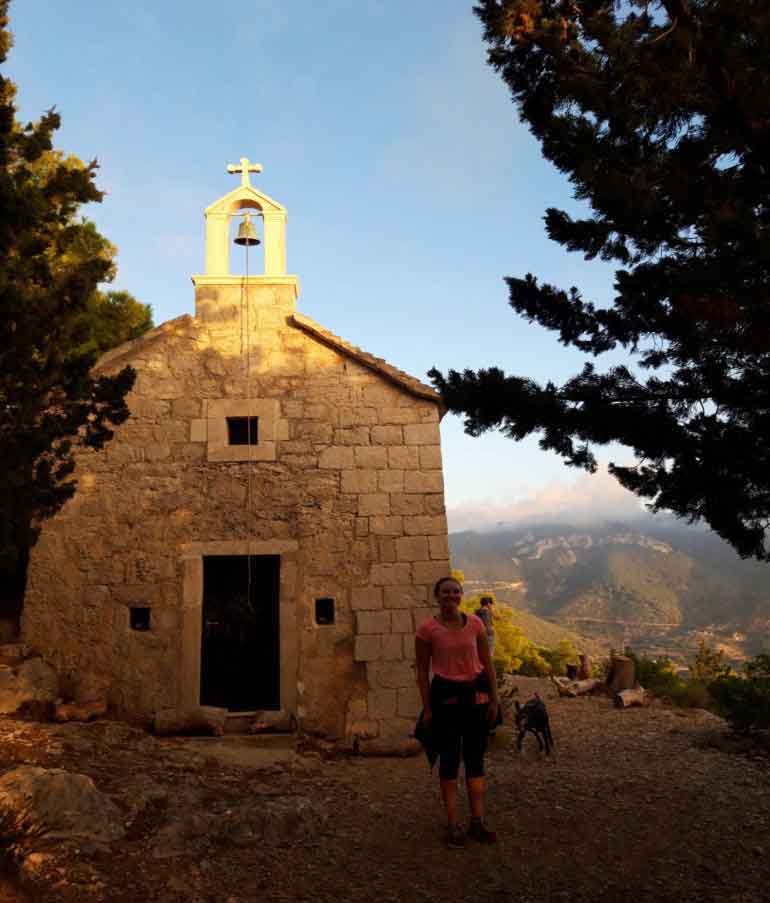 9. The Church of St. Blaise

‍
The Church of St. Blaise was recorded as the property of Benedictines from Biševo (from the church of St. Silvestar) in XII century. The church was built in pre-Romanesque an Romanesque style and was built and refurbished several times, in the XIV and XVI centuries. 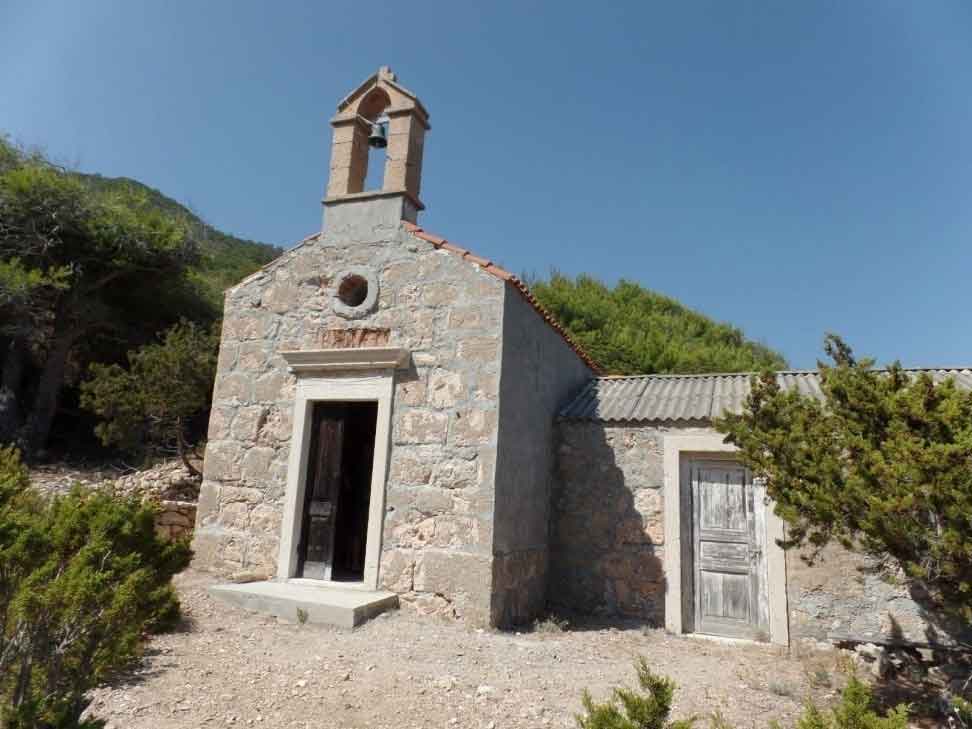 ‍
The Church of St. Andrew, located on Island of Svetac is the rest of the Benedictine monastery from the 13th century. It was built on the site of a pre-Romanesque church. The current church dates from the 18th century. The main facade is oriented towards the south. It is one nave with a semicircular apse and has a bell ring on a cross. The bell bears an inscription from 1524 and is decorated with a shallow relief oft he Renaissance. Inside of church, there are the remains of a stone statue of St. Andrew, broken in three pieces and completely insulated. The object is protected cultural asset categorized as „immobile cultural good – individually“. 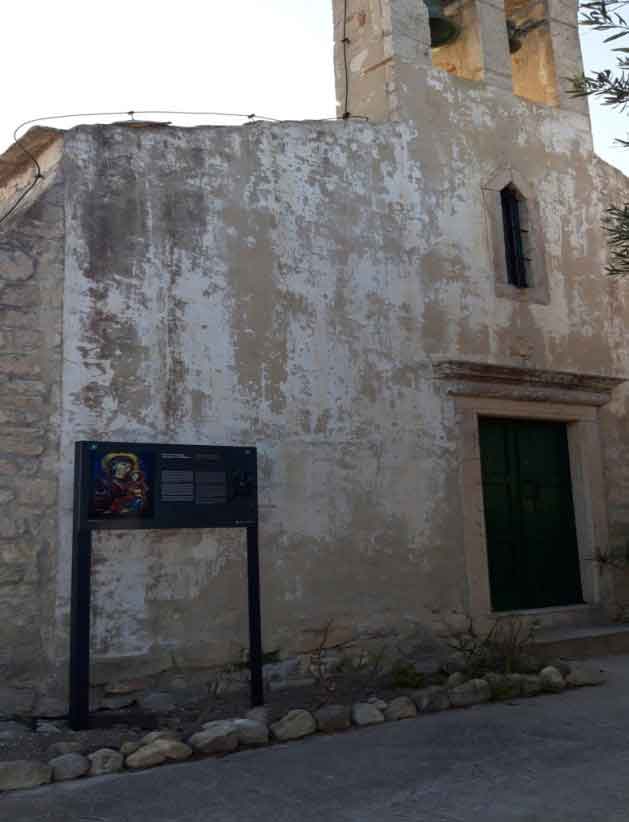 11. The Church of St. Silvester

‍
The Church of St. Silvester was built by priest Ivan Gaudi Grlic in the middle of the 11th century and was later given to Benedictines from the Tremiti islands. The churc was restored int he 17th century and in 20th century. 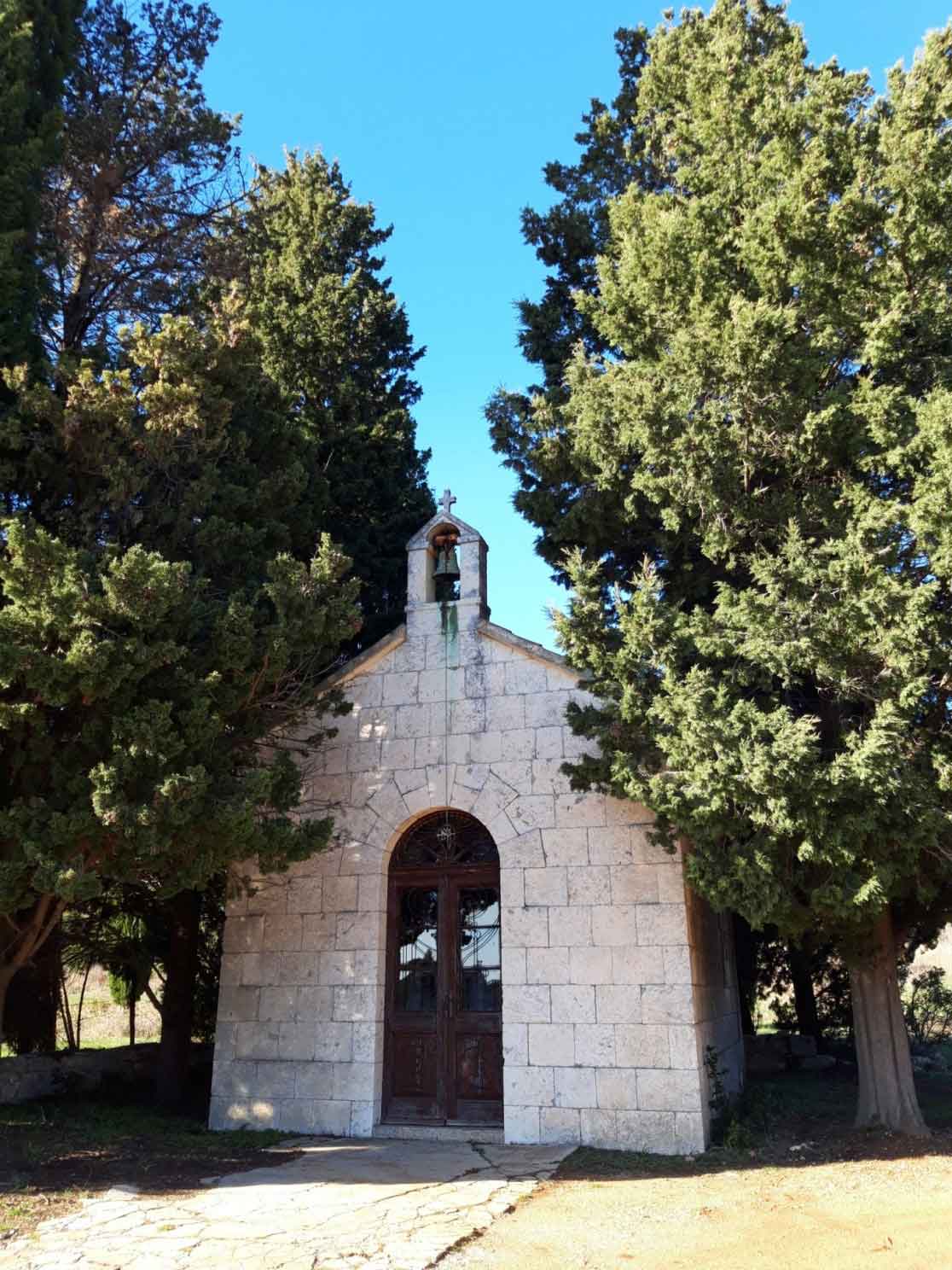 ‍
The Chapel St. Nicholas in Podhumlje was built by Nicholas Knight Mardešić on his property in 1926., aiming to build it in a tomb for himself and his wife, Maria. On the feast of St.Maria, St. Nicholas and St. Anthony of Padua celebrated Mass in the chapel for deceased Mardešić. The church and state permission to lift the tomb was obtained in 1930. The chapel was built in a simpler form compared to the project by Karlo Petrić. (Source: Parish of Podšpilje - about the hundred anniversary of the foundation, Mladineo G., Don Huljev I., 2017, p. 32). 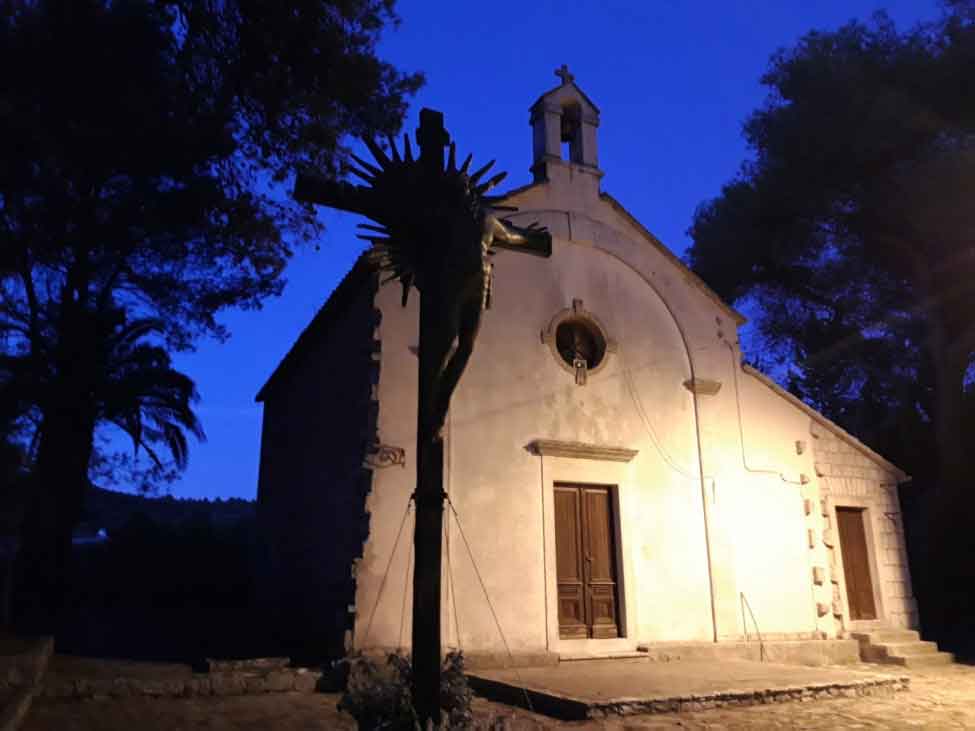 13. Sv. Mary, Church of the Birth of Mary, Podšpilje

‍
Preparations for the construction of the church in Podšpilje were started in 1891. It was used mostly local stone and domestic work force, and part stone was brought from Korcula. Building of the church did not begin regular maintenance of the mass, until 1917, after the establishment of a permanent patron. Today's church form dates from 1931. (Source: Parish Podšpilje - about one-hundredth anniversary of the foundation, Mr. Mladineo, Huljev I., 2017, p 7-10). 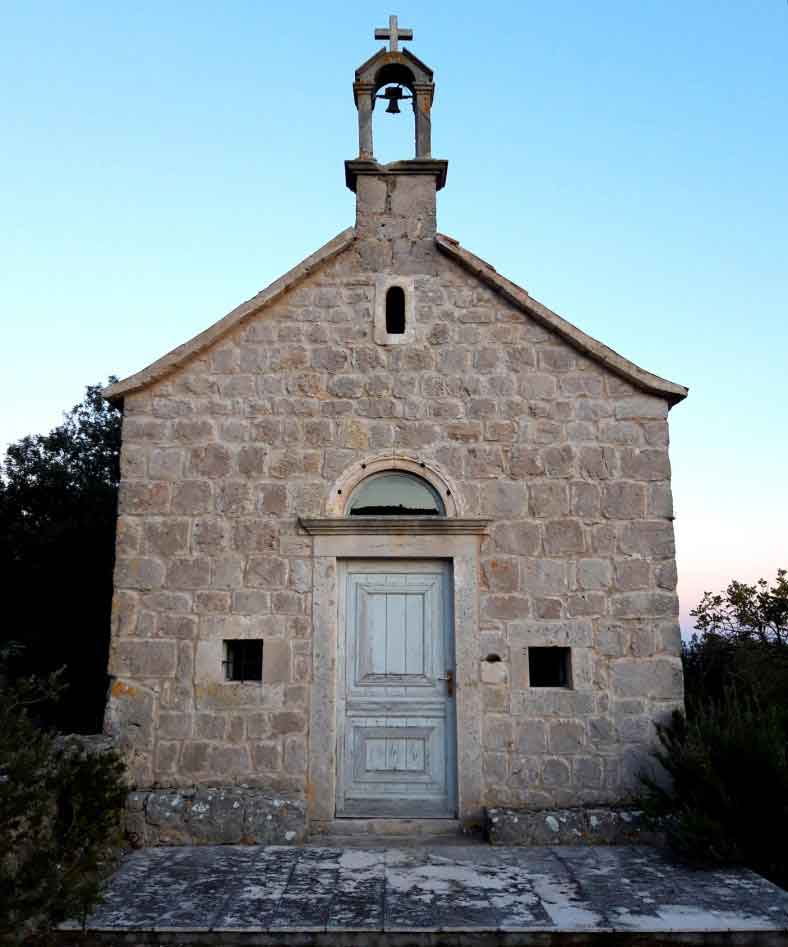 14. The Chapel of St. Anthony of Padoua "at Galia"

‍
It was built at the beginning of the 17th century by canonical and vicar don Ivan Antun Dojmi on their own property of Dojmi. From the past it belonged to the Dojmi family, but Mardesic family start to be its owner by marrying and never went to the ownership of the peculiar parish. In it, from the past, there were celebrating St. Anthony of Padua i St. John the Baptist, and after performed the blessing of the field. (Source of Parish of Podspilje - about the hundred anniversary of the foundation, Mladineo G., Don Huljev I.,2017, p. 31). 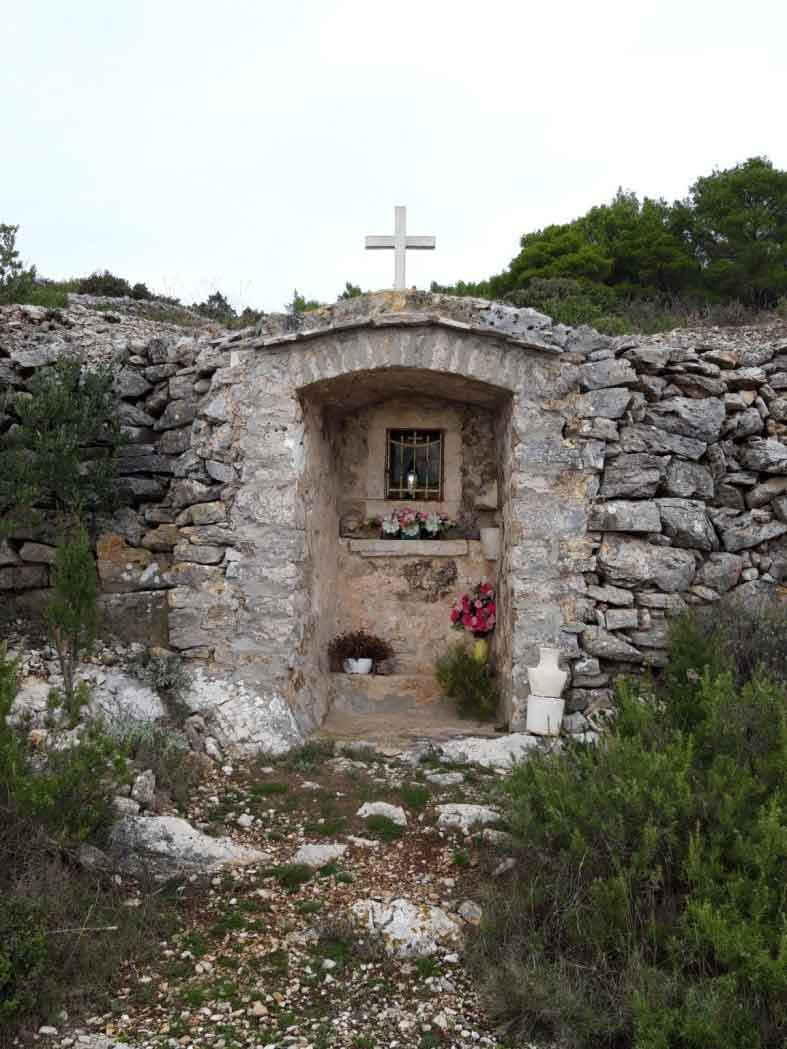